(pronounced AB-bah-thor)
Great Master of Greed, Trove Lord, Wyrm of Avarice
Pantheon
Dwarven
Quick Descriptions:
Abbathor appears as a very large dwarf clad in leather and furs. He is fat and piggy-eyed with sallow skin. He wields a diamond-bladed dagger with jewels set into the hilt.
The temple is in a hexagonal room, about 40 feet in diameter. The room is windowless, but is well-lit with wall sconces in every corner. The only entrance is the archway in the middle of the wall you are standing in. The walls are made of smooth stone blocks, separated by individual columns which are lightly engraved with drawvish patterns and painted in gold leaf. The room is sparsely furnished with heavy stone tables pushed up against each wall. In the center of the room is a plain altar of stone, blackened by the many fires.
Priests of Abbathor wear brilliant scarlet robes underneath leather armor, and often wear a leather cap.
ADVERTISING - PLEASE SUPPORT THIS SITE

Abbathor is the evil dwarven god of greed and an exarch of Bane. He is an intensely greedy deity and is both desirous and envious of others' riches. Abbathor and his followers believe in the acquisition of all forms of wealth by any and all means necessary.

Abbathor wasn't always evil. The creature that would become known as the Wyrm of Avarice originally concerned himself with the natural beauty of gems and metals, but became estranged from his pantheon when Moradin named Dumathoin the patron of gold dwarves, a position Abbathor had coveted since birth. Thereafter he traded the tradition and honor of the dwarves race for trickery and stealth. He had been denied the thing he wanted most, and swore never to be in the same position again. Henceforth, if something appealed to Abbathor, he took it. Since dwarves are prone to greed without any help from their deities, many have fallen to Abbathor's seductive call. The Trove Lord now seeks to pervert the whole of the dwarves race to his way of thinking, the greatest offense he can imagine to thumb his nose at his distant patriarch. Abbathor covets valuables and gems with intensity best described as sensual, and goes to any length to get what he wants.

Abbathor's followers believe in the acquisition of all forms of wealth by any and all means necessary. Priests of Abbathor trade (on the sly) with anyone, including duergar, drow, illithids, Zhentarim, orcs, giants, and other undesirable creatures or traditional enemies of the dwarves.

Priests of Abbathor strive to enrich themselves, taking advantage of their positions and influence to steal or deal themselves some personal wealth. Such funds are typically cached in remote, fiendishly well-trapped hideaways, as amassing enough loot to retire in luxury is a game and a driving motivation among priests of this god. As noted above, however, there is one strict rule: No priest of Abbathor can steal from any other dwarf, or influence events to cause harm to the person or wealth of any rival priest of Abbathor. This is the infamous Abbathor's Commandment, of which dwarven thieves are often reminded.

Priests of Abbathor always dress in red - a brilliant scarlet, worn as underclothing for everyday use and as over-robes for ceremonial occasions. Over this they wear leather armor with leather caps (never helms). If this armor must be discarded, dark crimson robes are worn to echo and yet mute the brightness of the scarlet underclothing. Clergy of Abbathor never wear wealth openly because of the god's saying: "The best is always hidden."

Novices of Abbathor are known as Goldseekers and full priests are known as the Hands of Greed. In ascending order of rank, the titles used by Abbathoran priests are: Coveter of Copper, Seeker of Silver, Luster of Electrum, Hoarder of Gold, Plunderer of Platinum, Miser of Mithril. Finally, there are the High Old Ones. These leaders of the clergy have unique, individual titles but are collectively known as the Masters of Greed. Specialty priests are known as Aetharnor, a dwarven word that can be loosely translated as "those consumed with greed".

of the Great Master of Greed are always in underground caverns or secret, windowless rooms. Sacrificial altars are massive, plain blocks of stone, blackened by the many fires laid and burnt upon them. (Note that nondwarves tend to panic when sacrificial fires are lit, and the smoke begins to billow!) Abbathor's places of worship can easily be mistaken for treasure vaults, as they are typically painted in gold leaf and filled with a cache of purloined treasures. In fact, the most sacred places of the Trove Lord are caverns that once housed the hoards of ancient wyrms.

Seek to acquire all that shines or sparkles, and revel in the possession of such. The wealth of the earth was created for those dwarves strong and crafty enough to acquire it by any means necessary. Greed is good, as it motivates the acquisition and the holding of all that is truly precious. Do not seize wealth from the children of the Morndinsamman, however, nor conspire against the favored of Abbathor, for such strife in the name of avarice weakens the clan.

Abbathor's avatar appears as a very large dwarf clad in leather and furs made from those non-dwarves who have opposed him in the past. He is fat and piggy-eyed with sallow skin. The avatar always wields a diamond-bladed dagger with jewels set into the hilt.

Of all the dwarven deities, he gets along best with Vergadain, with whom he sometimes travels.

Although he is the only evil power among the Morndinsamman, he is tolerated by the other dwarven gods because he has sided with them whenever a threat appeared from outside. Abbathor may be untrustworthy and the embodiment of all dwarven qualities the other gods would rather avoid, but in the end he's still a dwarf, and both they and Abbathor believe in sticking together. "Greed is good, but do not seize wealth from the children of the Morndinsamman," Abbathor teaches, "for strife in the name of avarice weakens the clan." 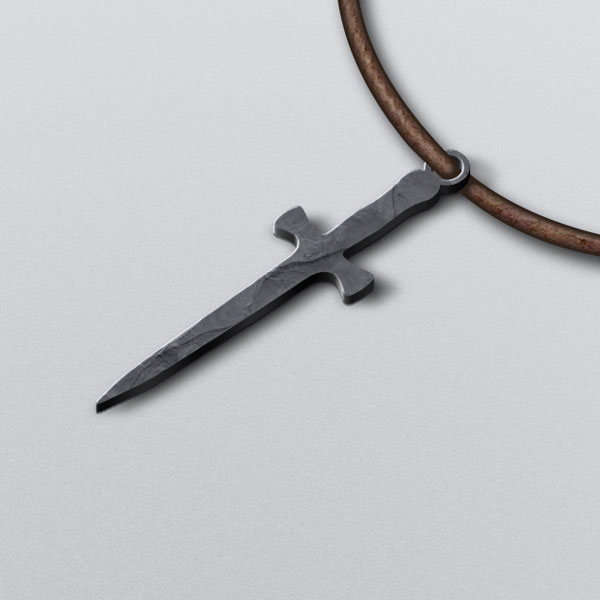 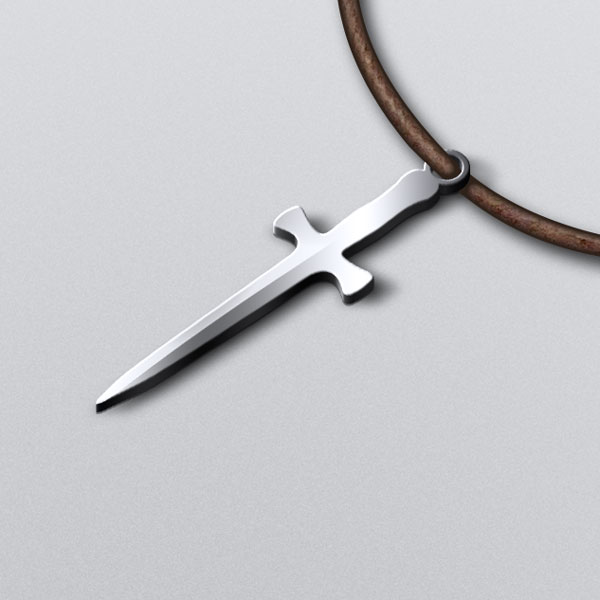 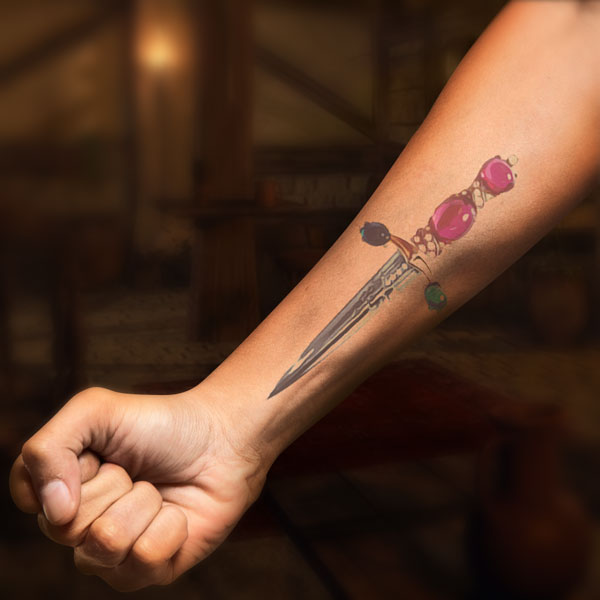 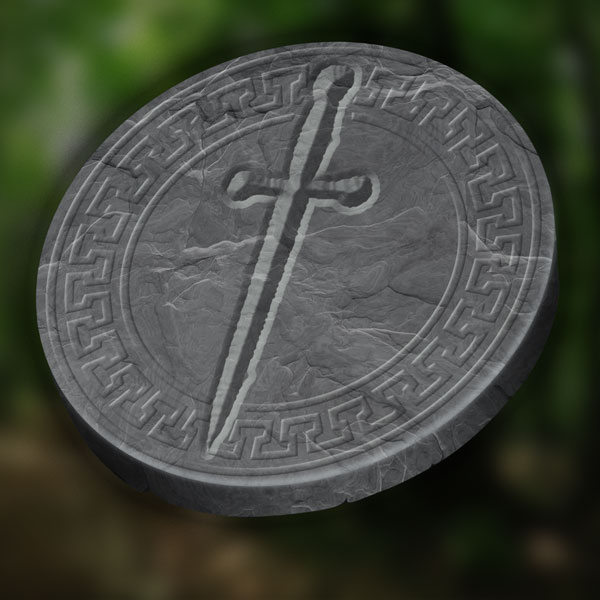 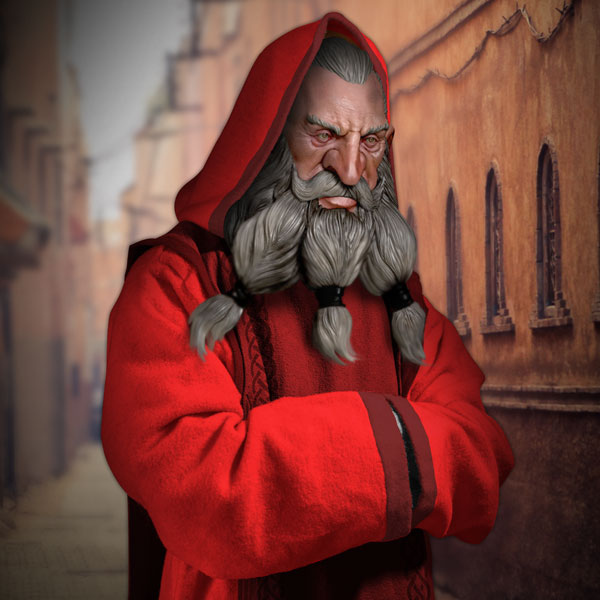 The robes of a priest of Abbathor. 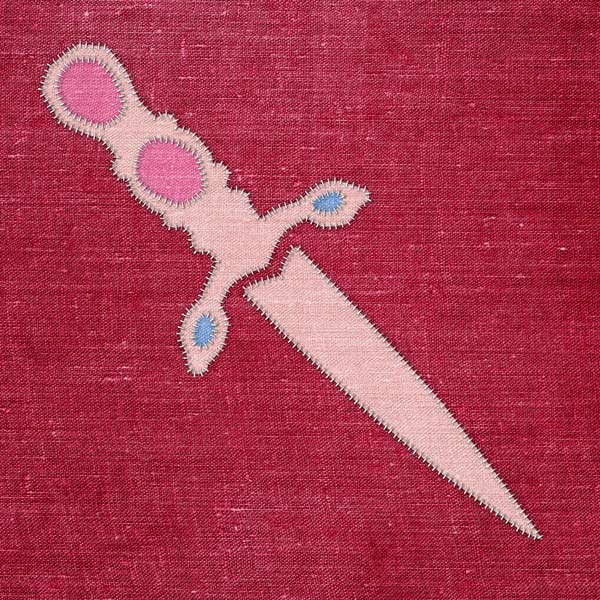 A crude patch of Abbathor's symbol. 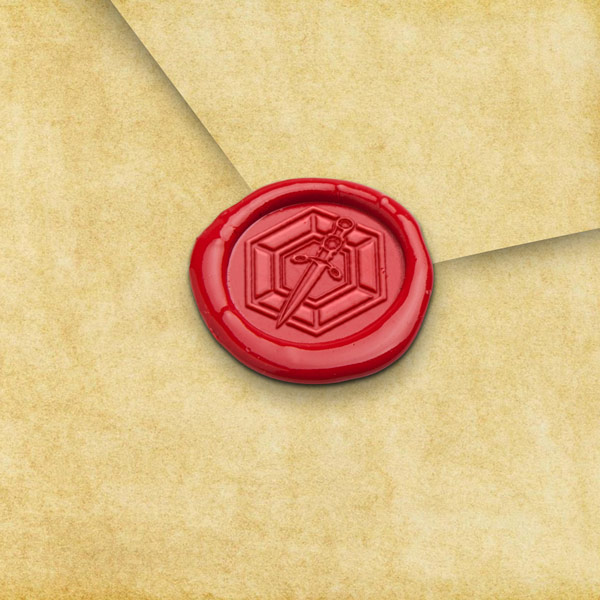 A wax seal of Abbathor's symbol. 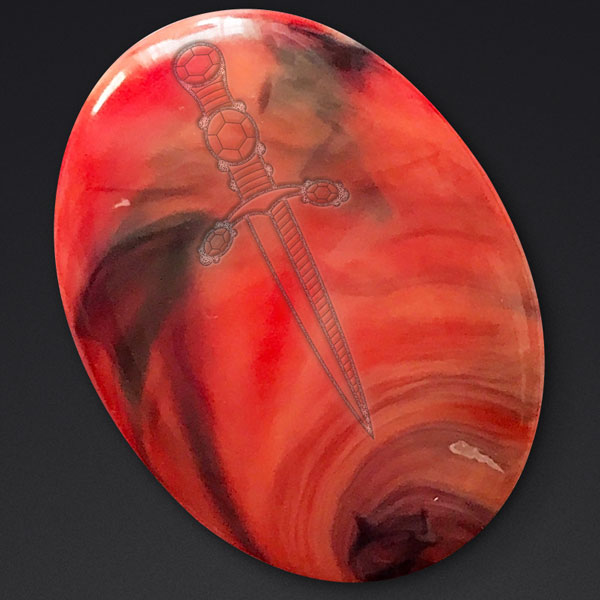 A red stone with Abbathor's symbol etched on the surface.
Source: Faiths and Pantheons