(pronounced ihl-MAY-ter)
The Crying God, the Broken God, the Lord of the Rack, the One Who Endures
Pantheon
Faerûn
Quick Descriptions:
Ilmater is a short, burly, balding male, wearing only a breechcloth. His body looks to have been badly mutilated by punishment and torture, and walks with a limp. Despite his appearance, he has a kind, homely face that is warm and comforting.
Ilmater's temple is a moderate-sized complex surrounded with a 6ft wall of red brick. The entrance is an archway with solid wooden doors. Inside is a large courtyard, leading to a central chapel, is a wooden stable and garden to the right, with a rectory and a small hospital to the left. The edges of the courtyard are adorned with various statues of Ilmater's giving saints. The chapel is a two-story brick structure with a central tower. The interiors has several rows of wooden benches, with a central aisle leading to a dias near the back. On the dias is a large stone altar. Behind the altar is a mural of Ilmater's faithful aiding people.
Ilmater's priest is a humble middle-age gentleman. He has shaggy gray hair, and rough stubble on his chin. He is wearing a dark gray robe with a lighter gray tabbard featuring Ilmater's symbol (pair of white hands bound at the wrists with a red cord). He has a set of medical tools and potions strapped to his leather belt.
ADVERTISING - PLEASE SUPPORT THIS SITE

Ilmater is the god of those who suffer, the oppressed, and the persecuted - He offers them relief and support, encourages them to endure, and who encourages others to help them, take their burdens or take their places. His portfolio includes endurance, martyrdom, perseverance, and suffering. Ilmater is a gentle, good-spirited, even-tempered deity who willingly shoulders the burdens of a long-suffering world.

Although he is low to anger, the wrath of the Broken Deity is terrible in the face of extreme cruelty or atrocities. When his avatar appears, he takes assaults upon his person passively and rarely lifts a hand against another. He is not totally nonviolent, though, as many often assume by his doctrine of endurance. When facing cruelties and atrocities his rage can boil up, and then he is a figure of frighteningly righteous wrath. He takes great care to reassure and protect children and young creatures, and he takes exceptional offense at those who would harm them.

Misunderstood by most, and often pitied, the church of Ilmater still has one of the largest and most faithful followings in Faerûn. In a cruel world, the suffering, the sick, and the poor have come to rely only on the Crying God's followers to provide succor to all. The church of Ilmater is widely loved by common folk in settled lands everywhere, and its clergy can count on generous support in their lifelong mission of healing.

The followers of Ilmater are often perceived as being intentional sufferers, but in reality they concentrate a lot of effort on providing proper treatment and healing to those who have been hurt. To a vocal minority, the church is scorned. Among those who hate weakness, the church of the Crying God is seen as weak and foolhardy—cruel tyrants and powerful villains alike dangerously underestimate its members.

Ilmatari share what they have with those in need and always take time to counsel those who are upset and care for the injured. Ilmatari speak for the oppressed, guide the lost, feed the hungry, shelter the homeless, and gather herbs and make medicines at all times for disasters to come. They bury the dead, treat the diseased, and give food, drink, and firewood to the poor. They see life as sacred and suffering as holy, but they do not stand in the way of others' desires or condemn them for their chosen path. When war is expected and time permits, clerics of Ilmater gather in strength with litters, shovels, tents, splints, bandages by the cartload, and wagons of medicines and healing potions to tend those who will soon suffer. They also tour the wealthier cities and settlements of Faerûn soliciting money to support the church. Many clerics learn alchemy so that they can help those beyond their immediate reach.

Few priests of Ilmater are soldiers, and fewer still are merchants, but they do outstrip all other priesthoods in the size, number, and level of treatment in the many infirmaries and leper sanctuaries they maintain. From their inception into the priesthood, Ilmatari are trained in the recognition and treatment of all known disease, injuries, and conditions; senior priests have had prepared detailed programmed illusions to show beings in various stages of harm. An Ilmatari priest who has been shown these could, for instance, recognize a human infested with rot grubs at a glance.

The process of joining the clergy of Ilmater is simple: A novice enjoys a gentle walk and talk with a senior priest, during which they talk and explore the novice's views of life. They then dine and the novice is (knowingly) given a wine taht puts him or her into a gentle trance where various clergy and wizards friendly to the faith can easily employ mind-scrying spells to thoroughly explore the novice's true feelings, loyalties, and aims. If no dedication to evil or precluding religious or secular loyalties are found, the novice is accepted and adorned with the simple robes of Ilmater (this cautious practice was instituted because so many folk in the past have posed as willing entrants into the Ilmatari just to learn their medicines and lore, and then stolen away with as many medical supplies as they could).

Ilmatari wear a solid gray tunic, tabard, and trousers, or gray robes. They wear skullcaps in gray (most clergy members) or red (senior clerics). Novices who have not yet been adorned wear no skullcaps. The symbol of Ilmater is worn as a pin over the heart or on a chain around the neck and serves as a holy symbol. Some of the older members of the faith have a gray teardrop tattooed to one side of their right or left eye.

In the field or on quests, Ilmatari priests dress appropriately for the mission and the weather, but usually wear gray tabards decorated with Ilmater's symbol stitched on the chest near the left shoulder over any other clothing or armor they wear. They are never without their holy symbols and a satchel of medicines, bandages, salves, splints, and slings.

The Adorned, as the clerics and monks of Ilmater are known, are organized in an informal hierarchy centered on the leader of a large temple, abbey, or monastery to whom the Ilmatari of the region report. All the Adorned are priests, but no titles are commonly used in the clergy except Brother and Sister. For senior clergy, Revered is added to this, and for the heads of temples, abbeys, and monasteries dedicated to the Crying God, Father and Mother are used. So, for example, the head of the Towers of Willful Suffering, the abbey to Ilmater in Eshpurta, is known as Revered Mother of the House Heldatha Dhussta.

Abbeys and monasteries are usually tied to specific temples, often adding a second tier in the informal hierarchy. There is no one pontiff of the faith or governing body, although the senior clergy come together for informal conclaves on occasion. Although most monks dwell separate from the church in monasteries or abbeys, some reside in Ilmatari temples as teachers or defenders.

Temples of Ilmater are typically located in the countryside along major routes, serving as waystations for weary travelers. Most are named for an Ilmatari saint, of which there are many. Most are manors of a sort, with protective walls around at least a chapel, chapter house, stable, and garden. Many have facilities dedicated to the care of the sick and injured. Others contain libraries, monks' quarters separate from the chapter house, or barracks for an affiliated knightly order.

Clerics of Ilmater pray for spells in the morning, although they still have to ritually pray to Ilmater at least six times a day.

They have no annual holy days, but occasionally a cleric calls for a Plea of Rest. This allows him or her a tenday of respite from Ilmater's dictates, to prevent emotional exhaustion or allow the cleric to do something Ilmater would normally frown upon. This custom is an established tradition that some leaders of the faith rely upon, sending their best fighting clergy out to do things that the church cannot otherwise accomplish (covertly removing a tyrant rather than confronting him openly, for example).

The most important ritual is the Turning: It is the duty of every cleric of Ilmater to convince the dying to turn to Ilmater for comfort, receiving the blessing of the Broken God before they expire (this deathbed prayer does not change the person's patron deity to Ilmater). As the veneration of Ilmater grows, even in death, his healing power becomes greater.

Ilmater's church has several affiliated knightly orders of paladins and warriors, including the Companions of the Noble Heart, the Holy Warriors of Suffering, the Order of the Golden Cup, and the Order of the Lambent Rose.

Monastic orders are also numerous, and include the Disciple of St. Sollars the Twice-Martyred, whose most famous facility, the Monastery of the Yellow Rose, is located in Damara, high up in the Earthspurs near the Glacier of the White Worm (monks of this monastery specialize in genealogical studies). Other Ilmatari monastic orders include the Followers of the Unhindered Path, the Disciples of St. Morgan the Taciturn, the Sisters of St. Jasper of the Rocks. Most Ilmatari monasteries traditionally are named after flowers that symbolize something of significance to the order, though this is not mandated.

One group of Ilmatari monks, the Broken Ones, acts as defenders of the faithful and the church's temples, as well as agents of punishment for those who cruelly harm others. These monks can multiclass freely as clerics.

Help all who hurt, no matter who they are. The truly holy take on the suffering of others. If you suffer in his name, Ilmater is there to support you. Stick to your cause if it is right, whatever the pain or peril. There is no shame in a meaningful death. Stand up to all tyrants, and allow no injustice to go unchallenged. Emphasize the spiritual nature of life over the existence of the material body.

The Crying God appears as a man whose body has been badly mutilated by punishment on the rack, crisscrossed with marks of torture and having broken and ravaged joints. He is short, burly, balding, and wears only a breechcloth, but his kind, homely face is warm and comforting.

Ilmater is an older deity who has long been associated with Tyr (his superior) and Torm, who together they are known as the Triad. The Triad work together closely, for in union they are stronger than as individuals. Ilmater is also allied with Lathander. He opposes deities who enjoy destruction and causing pain and hardship for others, particularly Loviatar and Talona, whose natures are diametrically opposed to his own. Other foes include Bane, Garagos, Malar, Shar, and Talos. 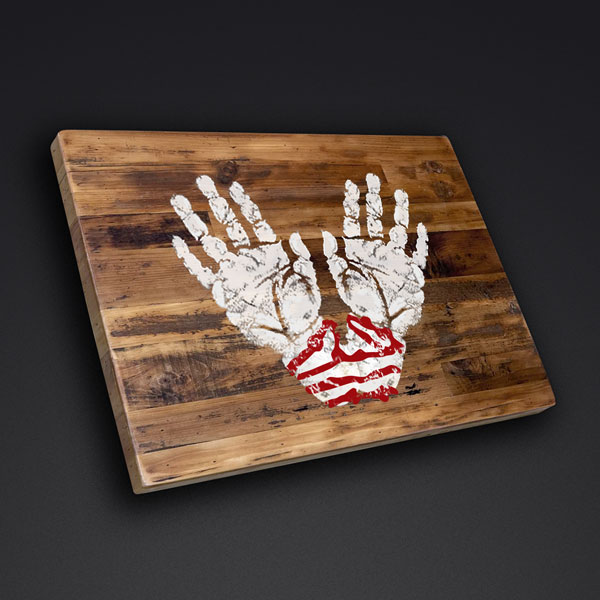 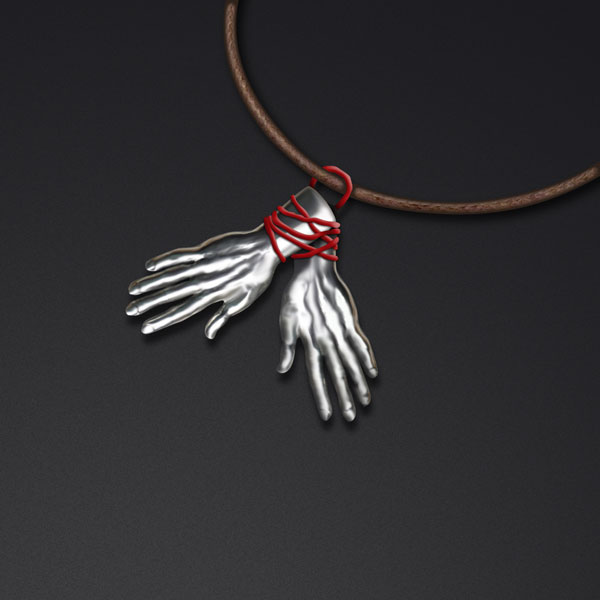 A necklace with Ilmater's symbol. 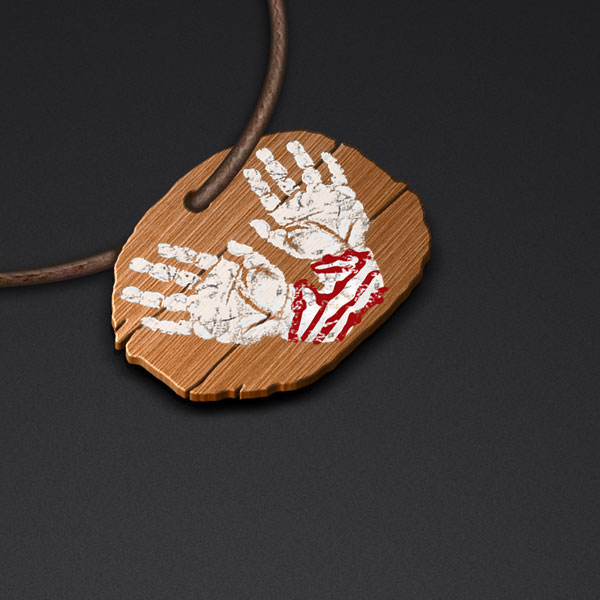 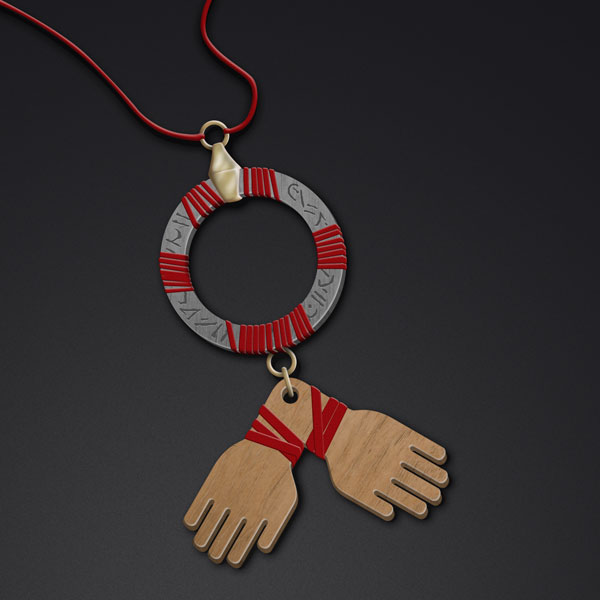 An intricate necklace and charm, with Ilmater's symbol. 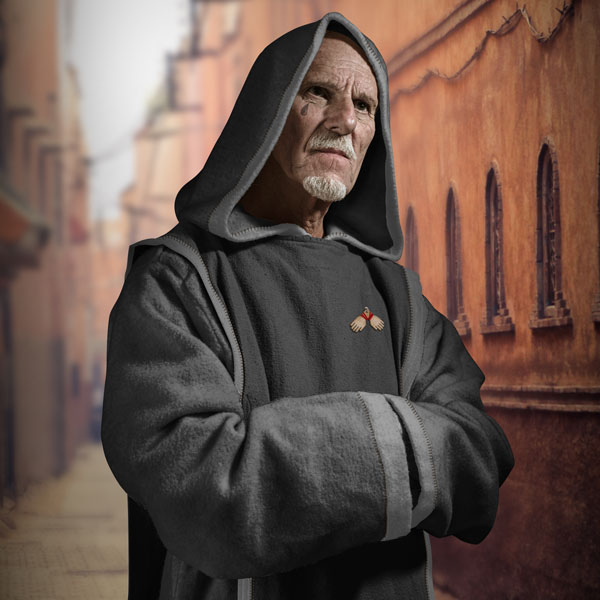 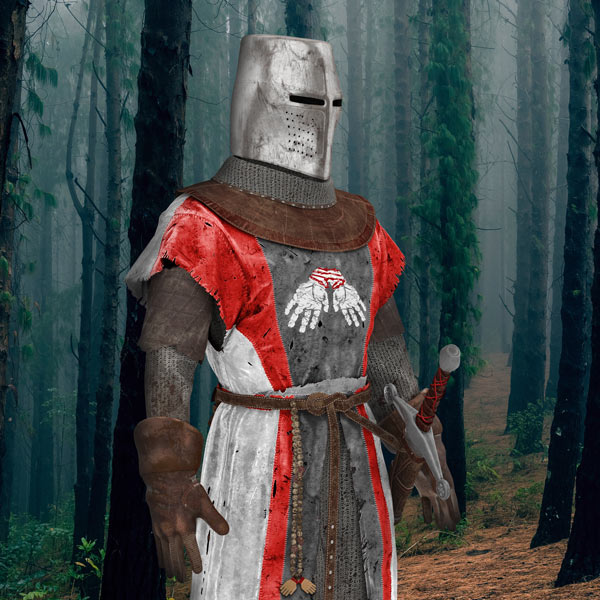 A knight dedicated to Ilmater. 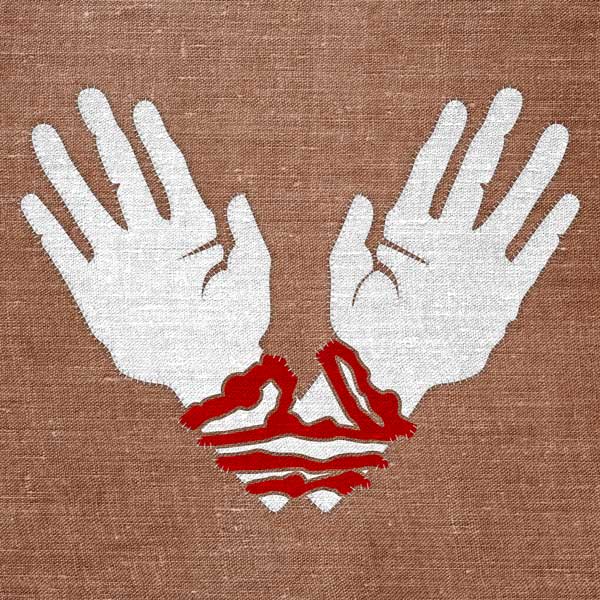 A sewn patch of Ilmater's symbol. 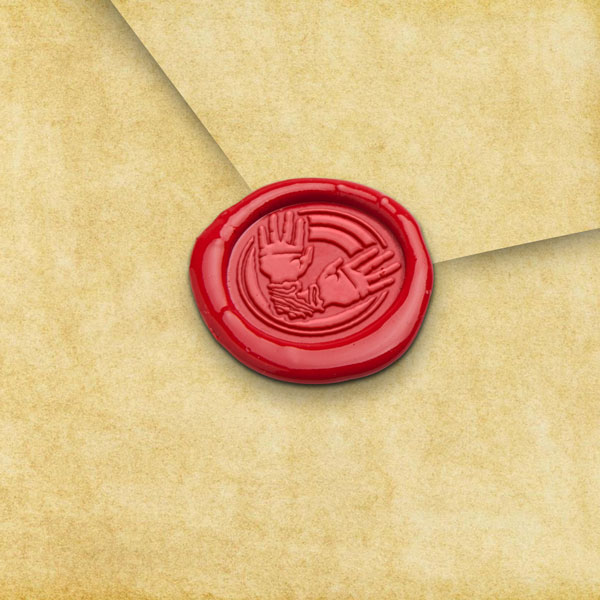 A wax seal of Ilmater's faithful. 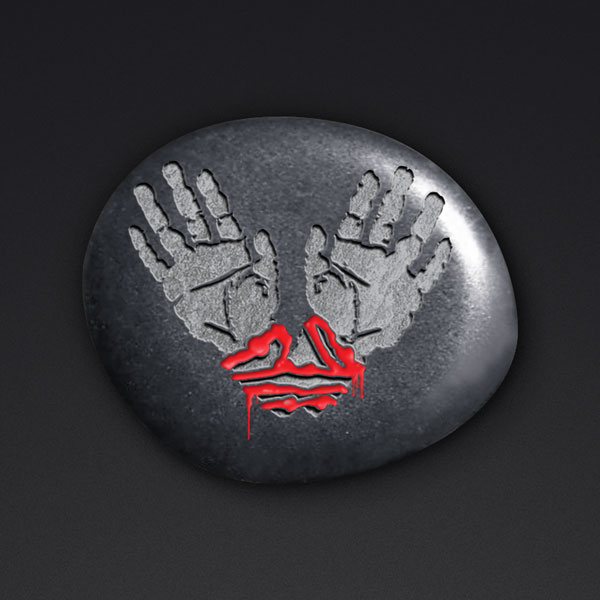 A rock with Ilmater's symbol carved and painted on it. 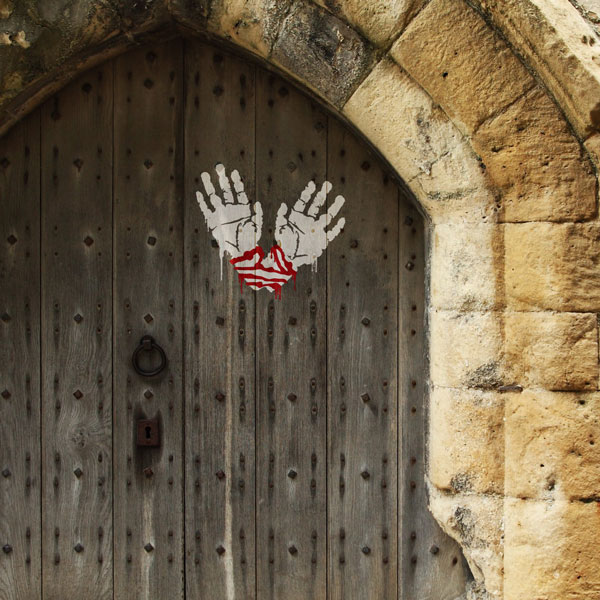 A door with Ilmater's symbol painted on it. 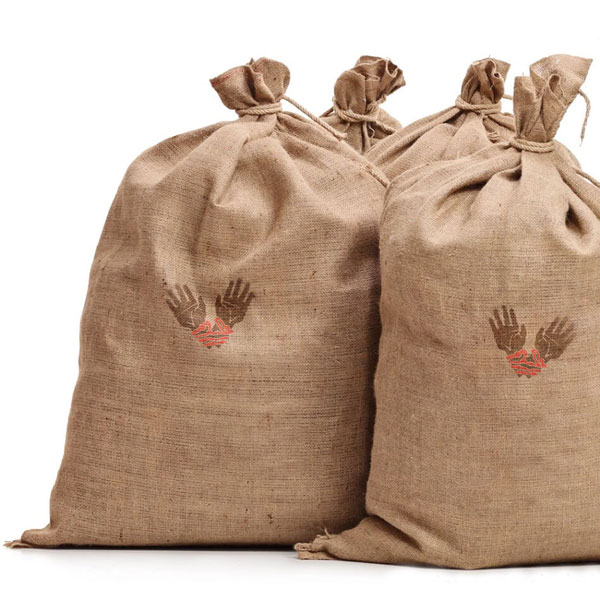 Burlap sacks with Ilmater's symbol on the side. 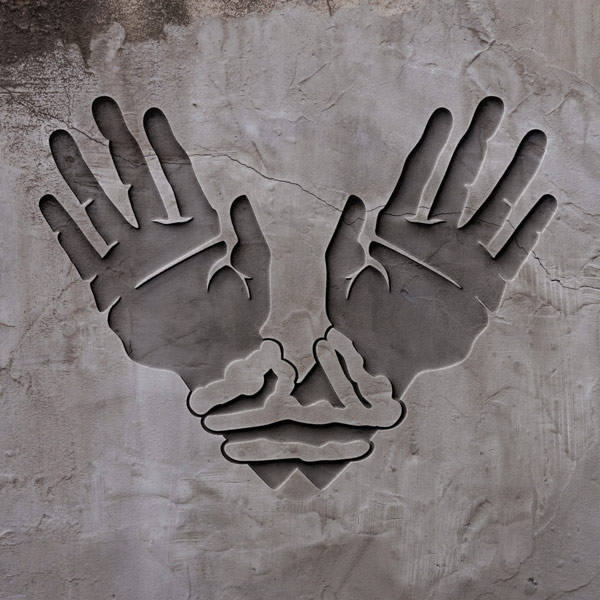 Ilmater's symbol engraved on a wall.
Source: Faiths and Pantheons