(pronounced lah-THAN-der)
The Morninglord
Pantheon
Faerûn
Quick Descriptions:
Lathander is a young, gold-skinned, athletic human man, with a calm smile and pleasant demeanor. He is wearing elegant clothes, a splendid crown, and dawn-colored robes.
Lathander's cathedral is a tall ostentatious building surrounded by large statues spouting water into a shallow moat that surrounds the building. The cathedral has tall stained-glass windows and a wide but short bridge leading to the main doors. The entrance leads to the main mass hall (which faces eastward), with rows of wood benches leading to a large central altar. Behind the altar is a beautiful stained-glass window with a scene showing Lathander standing in glory (which must be an amazing site during sunrise).
Lathander's priest has short, wavy brown hair and is dressed in a long-sleeved yellow robe. He has on a sunburst headpiece, worn at the back of his head, emulating the rising sun. He is wearing a painted wood medallion with Lathander's symbol on it.
ADVERTISING - PLEASE SUPPORT THIS SITE

Lathander, whose title is The Morninglord, is a deity of creativity, dawn, renewal, birth, athletics, spring, self-perfection, vitality and youth. Lathander is also the god called upon to bless birth and fertility related ceremonies. As the god of beginnings, Lathander traditionally receives prayer from many inhabitants of Faerûn at the start of a journey or endeavor. Lathander's name is invoked to seal alliances and start new ventures or companies. As a result, the god is very popular among the merchant classes.

Lathander has a reputation for being sometimes overly enthusiastic, slightly vain, and given to excesses, all flaws very common among the young. He is also eternally optimistic and doggedly perseverant.

Some followers of Lathander insisted that he was in fact the reincarnation of Amaunator, the Netherese god of the sun. Others took this heresy further, claiming that he would take up the mantle of the lawful neutral Amaunator again, and that the transformation from deity of the morning to sun god was imminent.

Lathanderites seek to build anew, encourage the rebirth of barren areas and more productive growth in cultivated lands, drive out evil, and either restore civilization to heights it once had or lead it to new dizzying heights of interracial harmony, cooperation, and pursuit of the arts and progress. To do this, they battle monsters to nurture civilization; they plant seeds and new seedlings, they encourage and aid adventurers, travelers, traders, and pilgrims as the harbingers of culture; and they recover lost magical items, pieces of literature, and works of art. Lathanderites study, restore, and attempt to duplicate, emulate, or expand upon these recovered items and works when possible.

Temples and shrines also sponsor athletic events and competitions where people of all classes and races can strive together in nonhostile competition in wrestling, distance throwing, target archery, running, jumping, horseback riding, or any of a number of other noninjurious sports. Other competitions sponsored by Lathanderian churches are for honors in the literary and fine arts. Such competitions are usually for a prize, which may be money, a special item or piece of art, or even a work written about the victor by a famous poet or artist. Winning a competition sponsored by the Lathanderites brings great status in certain circles.

Lathanderites are expected to make regular offerings of ideas, inventions, coins, discovered artifacts, or food to Lathanderian temples and shrines. Much more valuable offerings such as magical items or quantities of gold are demanded of nonbelievers in return for special services like rescue missions or raising from the dead.

Priests of Lathander dress in bright long-sleeved robes of yellow, red, and pink. These are often called "sun robes." Those priests with their own temples have their robes trimmed with ornately crafted gold ribbons. A sunburst headpiece, worn toward the back of the head to emulate a rising sun or radiant sunpeacock, completes the ceremonial garb. The ritual robes used at many rural shrines are simple cassocks with a color scheme by rank. Novices and postulants wear brown; adepts and underpriests wear russet and crimson. Senior priests wear scarlet, and subpriors and those of higher rank wear rose-red. The leader of the temple or shrine wears white. Holy symbols of Lathander are often made of painted wood, cut from rose quartz or similar minerals, or enchanted to radiate a dim, pink glow.

Adventuring clerics usually wear more utilitarian garb, but prefer reds and yellows, to the point of tinting their armor those shades. Most priests of Lathander favor chain mail, and often the only obvious mark of Lathander they bear is a rose-red circle on their shields and helm brows.

The Lathanderian religion has no overarching hierarchy from church to church and no central authority. When issues of doctrine or policy come up that must be decided upon, a conference is called at the church who initially presented the problem for consideration, and the issue is resolved. Regardless of rank or experience level, each Lathanderite priest is considered the master of the temple, shrine, or parish she or he is responsible for no matter the number of priests staffing the facility under him or her.

Novices in the Lathanderian faith were called the Awakened, while clerics were known as Dawnbringers. The full priests took a new name in his service when they were ready to signify that Lathander personally recognized and accepted them. This new name could either be used instead of their old name or simply used only when addressing other Dawnbringers and when in solitary prayer. Other titles included (in ascending order): Dawngreeter, Dawnlord, High Dawnlord, and Dawnmaster, while an elite cleric was referred to as a Morninglord.

The ostentatious cathedrals of Lathander, with their abundant statuary and gaudy stained-glass windows, reflect the order's great wealth. All temples include a mass hall that faces eastward, allowing the congregation to watch the first rays of the rising sun. In crowded or walled cities, temples are built for height, with ceremonies held on the third or even fourth floor of the structure. When such construction is impossible, a complex series of mirrors channels the sun's rays. Lathanderan architecture is dominated by elaborate fountains that often spill into shallow moats of holy water winding throughout the temple complex.

Temples and shrines to Lathander provide aid to adventurers and communities in their area as long as such aid is returned in good faith. Priests of Lathander try tirelessly to encourage those of good alignments to the more dedicated worship of the Morninglord if they are not already Lathanderites, but they do not insist on conversions or withhold aid if they are refused.

As may be surmised, most ceremonies of Lathander are held at dawn. Actions taken and contracts agreed to at dawn are considered blessed by the god. Marriages held at Lathanderian temples or shrines at dawn are considered especially blessed and so dawn is when the church most often holds such services, even if they are inconvenient for visiting guests. Funerals consist of a solemn, candlelit ceremony called the Going Down. This ceremony is followed by a wake that lasts until dawn prayers. Funerals are not held for those who are to be raised.

The most important ceremonies of worship are the daily prayers to Lathander at dawn, often held outdoors or where the dawn can be seen. This ritual is followed in importance by the twilight devotions. Some temples and shrines also add to these two daily ceremonies an optional prayer and song to Lathander at highsun. To these daily devotions are added special prayers said when offerings are presented at the altar and when priests call on Lathander for guidance or aid. These ceremonies are all joyful, but dignified, and usually involve prayer, song, and ritual drinking of well water touched by the dawn. On special occasions, on Midsummer morning, and on the mornings of the vernal and autumnal equinoxes, priests of Lathander perform the Song of Dawn, praising Lathander with a blend of vocal harmonies and counterharmonies of beautiful complexity.

The church of Lathander has a knightly orders of paladins, crusaders, and fighters known as the Order of the Aster. Members of this order protect temples and shrines, serve to lead large military groups levied as needed to serve the church, and roam the land seeking to do good in Lathander's name and promote his worship. Individual temples and shrines of Lathander do not usually maintain standing military forces of substantial size due to their cost, although they often retain warriors and members of the Order of the Aster to guard their establishments in numbers that each temple decides are appropriate and affordable.

Strive always to aid, to foster new hope, new ideas, and new prosperity for all humankind and its allies. It is a sacred duty to foster new growth, nurture growing things, and work for rebirth and renewal. Perfect yourself, and be fertile in the mind and body. Wherever you go, plant seeds of hope, new ideas, and plans for a rosy future in the minds of all. Watch each sunrise. Consider the consequences of your actions so that your least effort may bring the greatest and best reward. Avoid negativity, for from death comes life, and there is always another morning to turn a setback into a success. Place more importance in activities that help others than on strict adherence to rules, rituals, and the dictates of your seniors.

Lathander appears as a young, gold-skinned, athletic human man ready with a calm smile and pleasant demeanor. He wears an elegant clothes, a splendid crown, and dawn-colored robes when on missions of diplomacy. When conducting violent business, Lathander wears fluted silver and gold armor.

Lathander and Chauntea had been romantically connected for centuries, and saw each other as kindred spirits. His allies included Gond, Tymora, Tyr, Torm, Ilmater, Sune, Selûne, Oghma, Kelemvor, and Mielikki. His foes were Cyric, Talos, and Shar. Helm held a great deal of resentment for Lathander, as the latter indirectly caused the death of Helm's lover, Murdane. 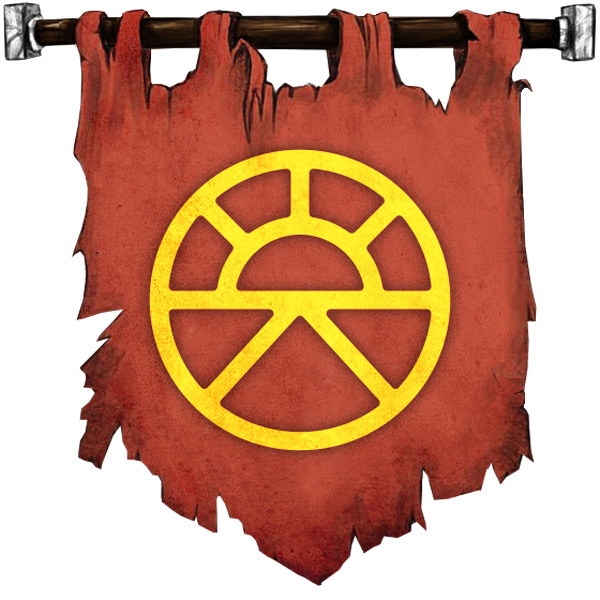 An alternative symbol of Lathander. 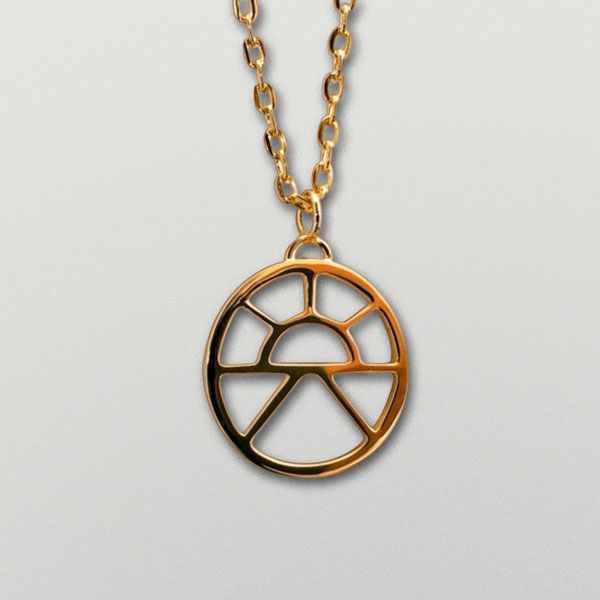 A gold necklace featuring the symbol of Lathander. 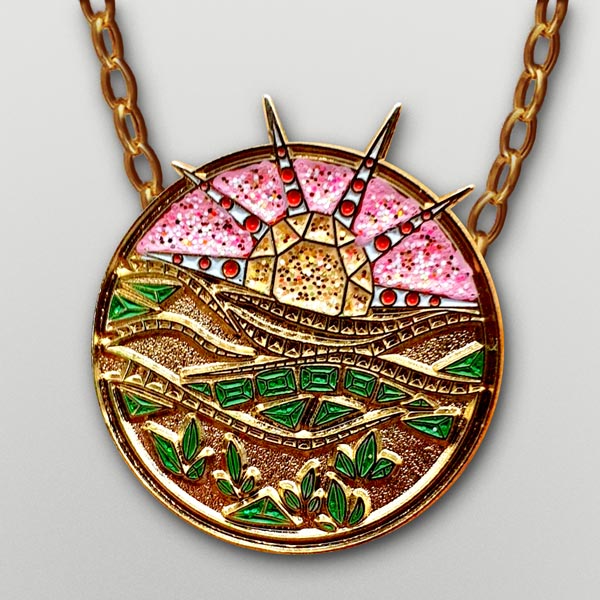 A jeweled pendant belonging to a follower of Lathander. 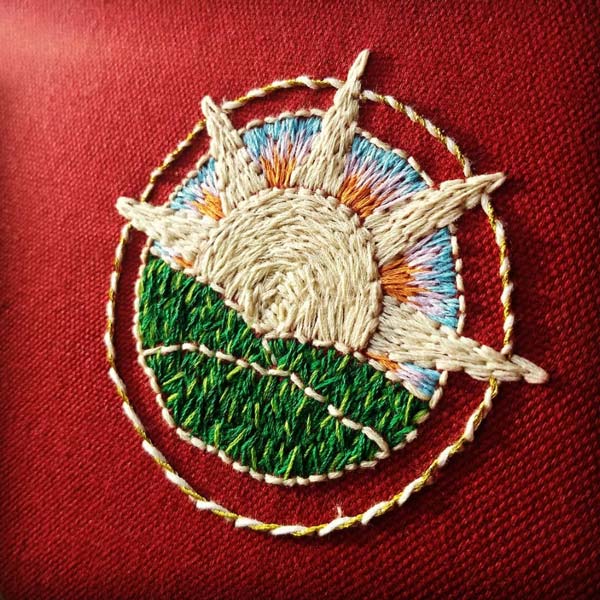 A stitched patch of Lathander's symbol. 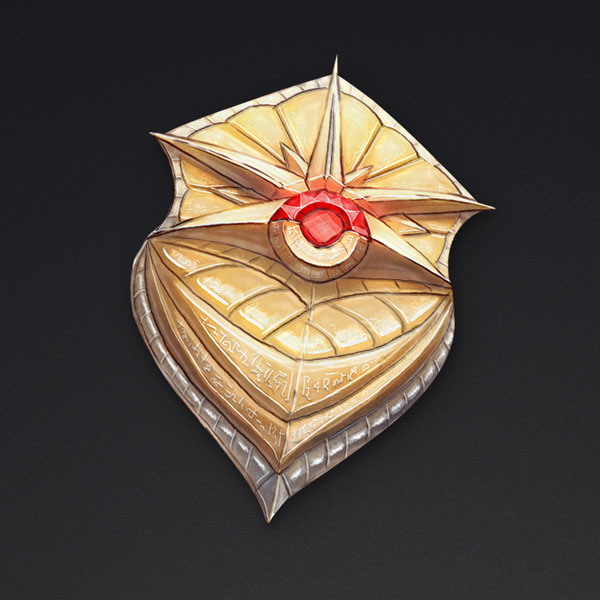 A shield of one of Lathander's faithful. 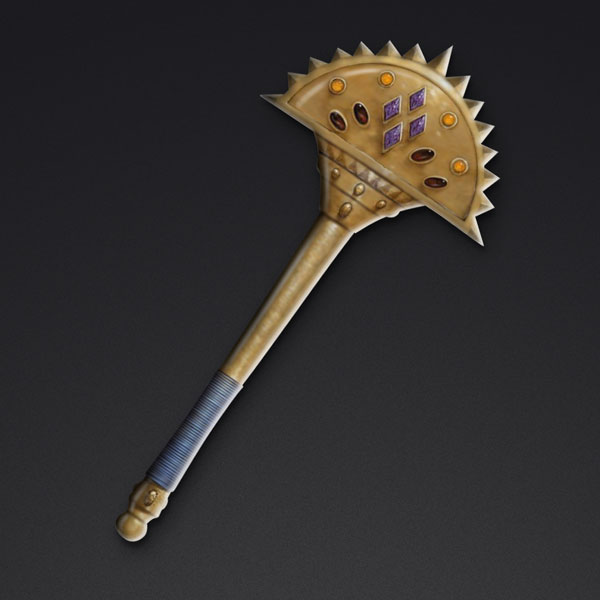 A mace of Lathander's faithful. 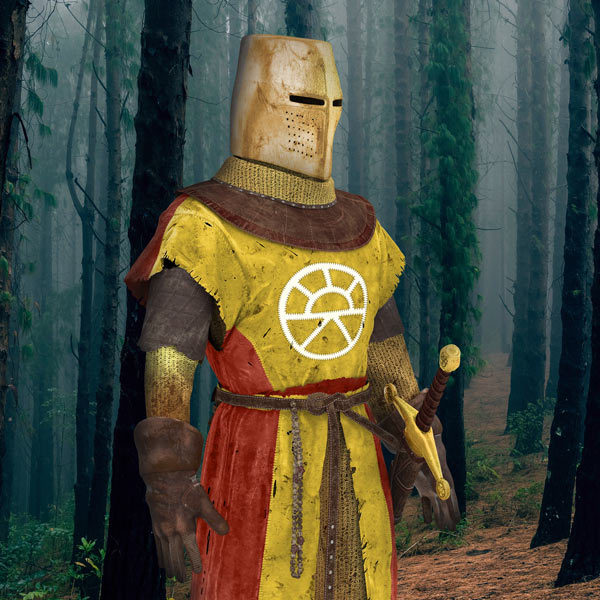 A knight of Lathander. 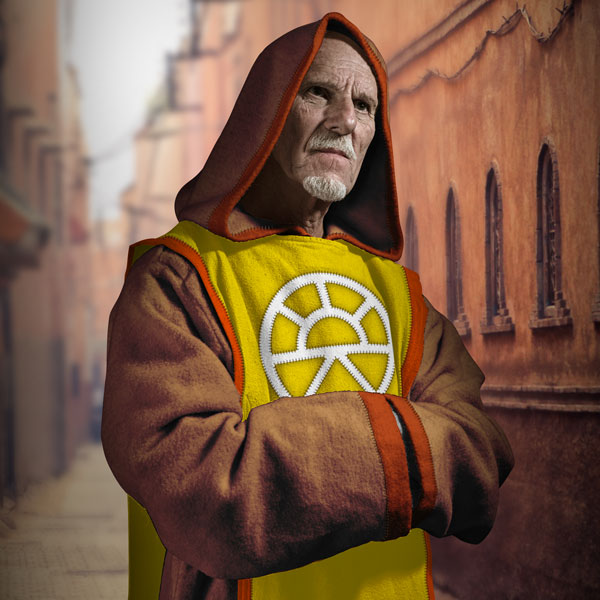 A priest of Lathander. 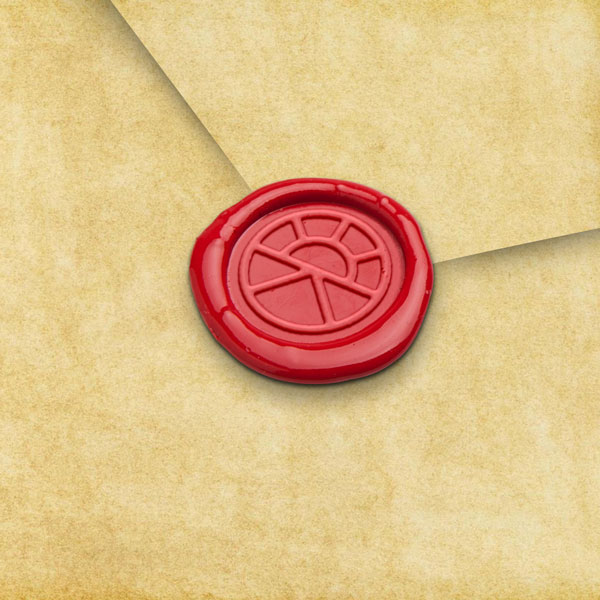 A wax seal with Lathander's symbol. 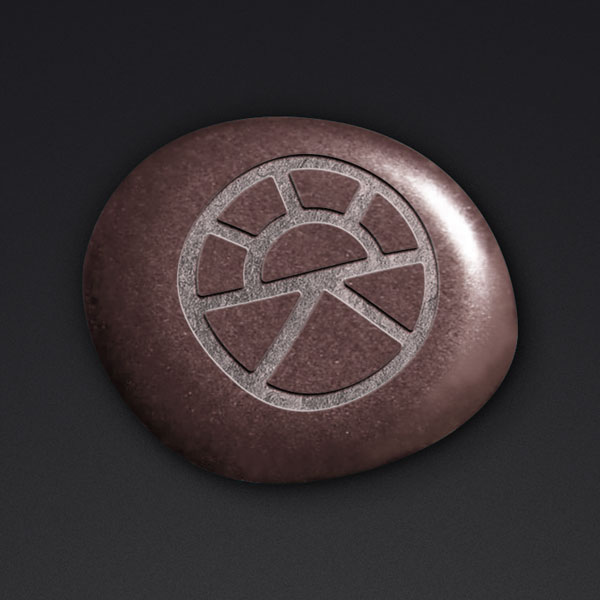 A stone with Lathander's symbol carved on the face. 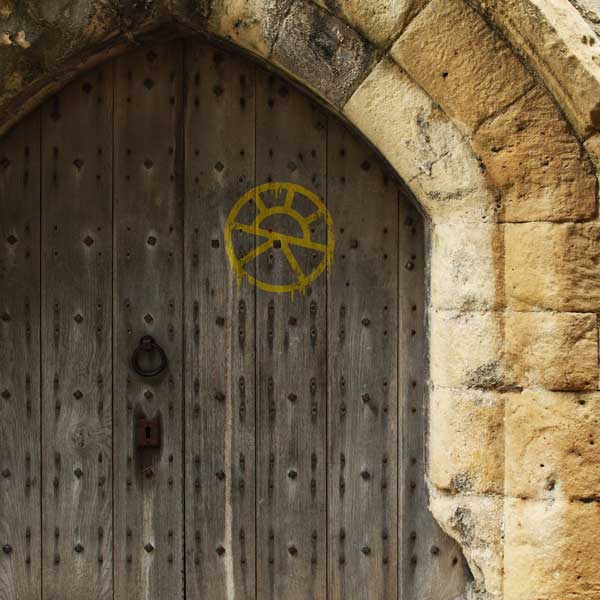 A door with Lathander's symbol painted on the front. 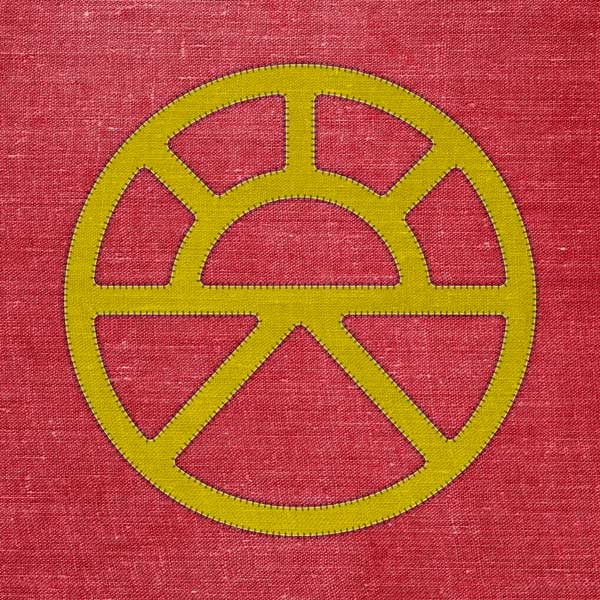 A sewn patch with Lathander's symbol. 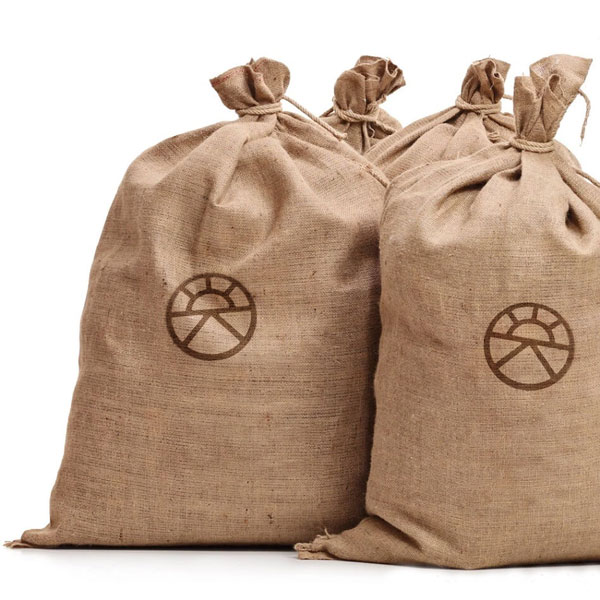 Burlap sacks with Lathander's symbol on the side. 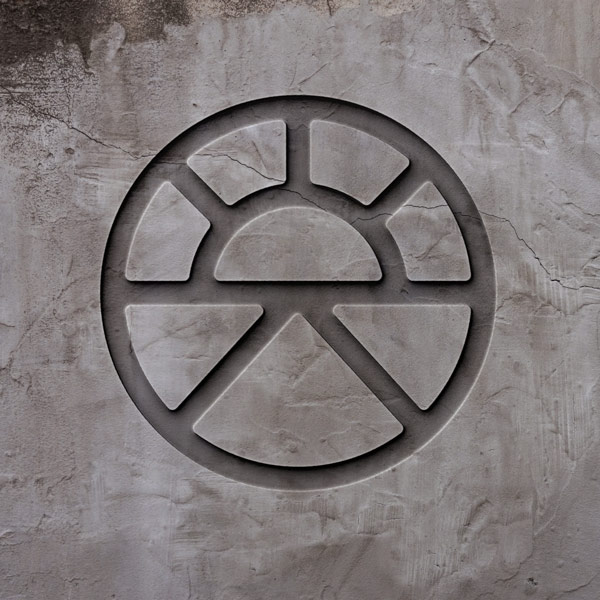 Lathander's symbol engraved on a wall.
Source: Faiths and Pantheons