Articles : What is D&D : Campaign Setting

To return to the Dungeons & Dragons page, click here

Dragonlance is a shared universe created by Laura and Tracy Hickman, and expanded by Tracy Hickman and Margaret Weis under the direction of TSR, Inc. into a series of popular fantasy novels.

In 1984, TSR published the first Dragonlance novel, Dragons of Autumn Twilight. It began the Chronicles trilogy, a core element of the Dragonlance world. While the authoring team of Tracy Hickman and Margaret Weis wrote the setting's central books, numerous other authors contributed novels and short stories to the setting. Over 190 novels have used the Dragonlance setting, and have been accompanied by supplemental Dungeons & Dragons campaign setting material for over a decade. In 1997, Wizards of the Coast LLC purchased TSR, and licensed Dragonlance to Sovereign Press, Inc in 2001 to produce game materials; this licensing agreement expired in 2007. 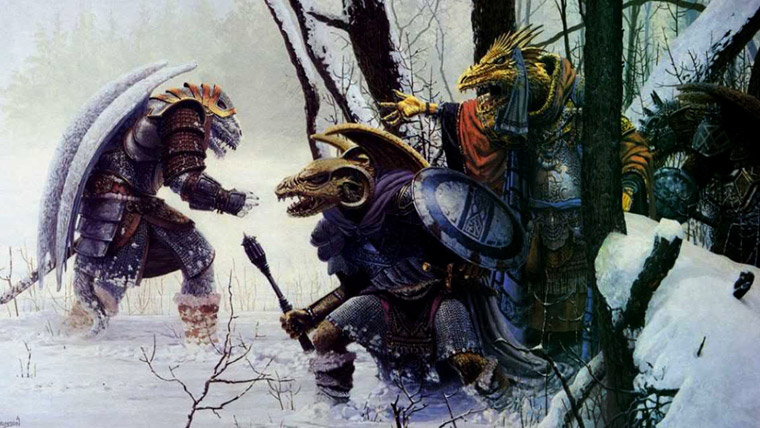 The fictional Dragonlance world of Krynn contains numerous characters, an extensive timeline, and a detailed geography. The history of Krynn consists of five ages. The novels and related game products are primarily set in the fourth age, The Age of Despair. Since February 2009, the fifth age, the Age of Mortals, has been used. The Heroes of the Lance, created by Weis and Hickman, are the popular protagonists of the Chronicles trilogy. Along with D&D's world of the Forgotten Realms, Dragonlance is one of the most popular shared worlds in fiction.

TSR created Dragonlance as a campaign setting for the Advanced Dungeons & Dragons (AD&D) roleplaying game in 1982. They published the first sourcebook, Dragonlance Adventures, in 1987. When AD&D was updated to the 2nd edition, the Dragonlance campaign setting was updated as well. However, in the 1990s, Dragonlance was converted to use the new SAGA roleplaying system, which uses cards to determine the effects of actions. In 1996, the Dragonlance: Fifth Age roleplaying game was released; the game used cards to produce random results instead of dice, and emphasized storyline development. When the 3rd edition of Dungeons & Dragons was released, Dragonlance was again updated with a new sourcebook (Dragonlance Campaign Setting), although no new adventures were published by Wizards of the Coast. Wizards of the Coast also turned over all responsibility for maintaining the Dragonlance setting in the 3rd edition to Margaret Weis's home company, Sovereign Press.

Books in the Dragonlance Series: